The real challenge of mobiles and web services is… Voice 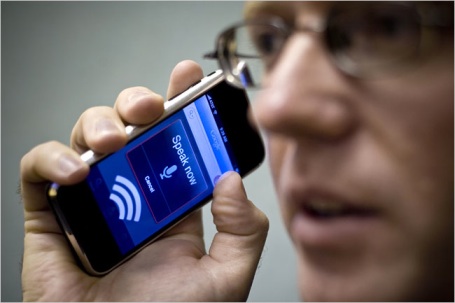 Discovering this article “The next big thing in mobile is… voice?” from Micheal Lambert, we learn why voice is the real challenge for mobiles phone services today. We have take some elements as summary but the complete article is really good to read.

Today, texting and mobile applications have surpassed voice in popularity, arguably because of their dynamic and flexible nature. Sending photos to friends in real-time is a snap, as is using SMS to update our Twitter status. […] This burgeoning app market has a limited lifespan, though. Size and device constraints will eventually throw up roadblocks to mobile innovation – meaning it might be time to reevaluate our reliance on keyboards and touch screens.[…]

Voice has primarily sat apart from mobile applications on handsets, being mostly limited to basic phone functionality. Voice calls and the way we use them have remained fairly static since their inception in 1876. The real changes have been in the device, rather than the communication medium itself. […]

The next logical step would be for something to emerge that tied all voice apps together; a way for the average mobile user to access all of them at once without the hassle of memorizing seven different usernames or figuring out one more user interface.

‘Voice Web’ technology is starting to let users do just that.

By Michael Lambert
Senior Director of Marketing for Ditech Networks

Source: VentureBeat: The next big thing is voice?