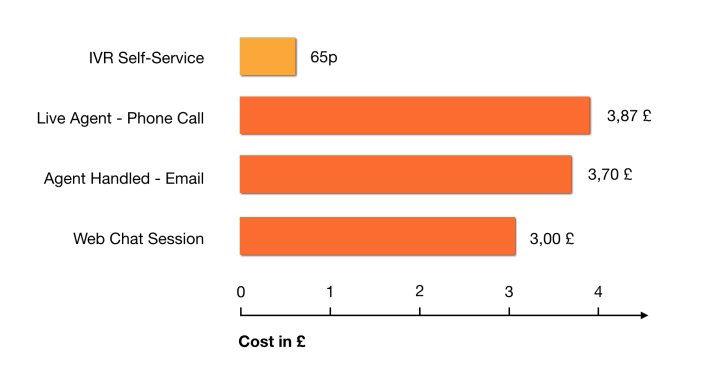 An new interesting report from ContactBabel has revealed that the average cost of a telephony IVR self-service session is 65p, compared to £3.87 for a live agent call, £3.70 for an agent-handled email and £3.00 for a web chat session. “While the future of customer contact will involve the extremes of highly personalised live service on the one hand, and the increasing use of automated systems on the other, we’re seeing that businesses and solution providers are looking to build strong links between automated and live service options to support seamless transitions as required,” said Steve Morrell, author of the report. “Self-service can truly be ‘win-win’ for customers as well as businesses. In the past, most self-service has been about cutting businesses’ costs, but the joined-up thinking now being shown and the increasing acceptance that it’s now an omnichannel world is […]
Do you like it?1
0 Read more

Today, if you have to manage Video Communications over Internet (public, private, wifi, 3g, 4g…), you may think about how to solve some very common public IP networks’ barriers and issues like: Packet lost, Firewalls policies, Router NAT, Packets filtering, Low Bandwidth, Connection cuts off… Now, the question is: “How we really manage to make voice or video calls on that network conditions!” Obviously, it’s not so easy with a common telecom protocol. This SIP vs RTMP Comparison Report, will help you to learn a bit more about these two protocols: The Session Initiation Protocol (SIP) is an IETF-defined signaling protocol widely used for controlling communication sessions such as voice and video calls over Internet Protocol (IP)… The Real Time Messaging Protocol (RTMP) is a public protocol developed by Adobe/Macromedia for streaming audio, video and data over the Internet, and […]
Do you like it?1
0 Read more
Categories

InsideCTI: The future of video in the contact center

We are pleased to share this very good article by John Stepp from InsideCTI about The Future of Video in the Contact Center. There’s very few contents about video contact centers but technology is ready for the next big thing for human communications and businesses. By John Stepp, InsideCTI When I was on the phone recently with my website provider, I really would have liked to have had a video connection. I am certain that I could have gotten more out of the call if it was video. At least it was a real time call and not through e-mail. The voice inflections gave me enough doubt to go ahead and pursue an alternate provider. Then again, video might have given my web site provider the ability to instill the confidence necessary for me not to pursue and alternative provider. […]
Do you like it?1
0 Read more
Categories

Article: Explaining the (non) adoption and use of interactive voice response (IVR) among small and medium-sized enterprises

This article by University of Geneva – Switzerland (by Caroline Kähr and Martin Steinert) talk about the (non) adoption of IVR self-service technologies and use of interactive voice response (IVR) among small and medium-sized enterprises. It also explores why advancements in IVR technology are leading to a growing number of self-service options and opportunities for big corporations to boost productivity. To our opinion, IVR vendors have focused their market in large deployments for long time and now it’s time to improve SME business processes too with flexible and low cost IVR systems like VXI*/Asterisk platforms. Executive Summary: Typically, the penetration of interactive voice response systems (IVRs) is described as being very high especially among large companies. The paper at hand discusses the use and adoption rate of such systems among companies, especially among small and medium-sized enterprises (SME). The study […]
Do you like it?2
0 Read more
Categories

VuiCloud: Increasing the use of Speech in IVR Applications

We are pleased to share a very good report and interesting IVR figures for you summer reading from VuiCloud (Interactive Digital). Download (from the source): [download id=”133″ format=”1″ autop=”false”] Executive Summary: Speech is one of the few technologies that has the potential for enhancing telephone self-service. The technology, if used properly, provides motivation for significant upgrading of existing self-service installations. That said, telephone self-service in general is one of the few technologies that is strongly disliked by the user community. This is largely because the bulk of the implementations have been done so poorly. According to ASR News, in 2010, the total self-service installed base was 8.6M ports worldwide. Additionally, in 2010 there were: A total of 889,640 self-service port shipments, of which 79.54% were for the Customer Premise Equipment market. A total of 75.9B DTMF self-service inbound call minutes worldwide […]
Do you like it?1
0 Read more
Categories

We are pleased to share some IVR trends for 2011 from IVRS World. What IVR technologies or IVR applications would be hit in the year 2011 ? Here is a list of six elements that might see high usage as well wide acceptance among people! Interactive Voice & Video Response IVR Payments Speaker Recognition Speech Recognition IVR Hosting Bulk Voice Call
Do you like it?1
0 Read more
Categories

This report by The Information Technology & Innovation Foundation (ITIF) surveys the adoption of self-service technologies delivered via kiosks, the Internet, mobile devices and the telephone and the many benefits to consumers, businesses and the economy. It also explores how advancements in technology such as Telephony (IVR), Internet,  Wireless networks and the availability of broadband Internet access, are leading to a growing number of self-service options and opportunities for companies to boost productivity. The report also helps makes the case for the government to embrace self-service technology to deliver services more efficiently and more conveniently to citizens. A very good document for summer reading! Executive Summary: The past decade has witnessed a rapid growth in self service that allows consumers to take on the traditional role of a service worker in the provision of a service. Self service has long […]
Do you like it?1
0 Read more
Categories

Opus Research is featuring I6NET in an article by Dan Miller entitled “Version of VXI* for Asterisk Now Runs in Amazon EC2 Cloud”. Here is a brief snippet: Earlier this month the the folks at i6Net Technologies showcased the release of a new version of its VXI* VoiceXML browser here. In a series of subsequent posts, the site offered pointers or suggestions regarding implementation of VXI* as a “plug in” for Asterisk-based IP-PBX’s including a set of virtual solutions where the browser is running in association with an instantiation of Asterisk 1.4 virtual PBX in Amazon’s EC2 (Elactic Compute Cloud) data centers […] Optimization of EC2 to boost the performance of Asterisk seems to have begun in earnest roughly a year ago. Adding speech-enabled IVR using i6net’s beta program for testing VXI based VoiceXML scripts in EC2 began the following […]
Do you like it?1
0 Read more
Categories

Nuance-Forrester: Independent Study Finds Consumers Want Increased Automation in the Contact Center and have an Overwhelming Interest in Proactive Notifications

83% of Consumers Attribute Some Part of a Bad Customer Service Experience to Live Agent Interactions Burlington, MA, January 13, 2010 – Nuance Communications, Inc. today announced the findings of a commissioned study conducted by Forrester Consulting on behalf of Nuance titled, “Driving Consumer Engagement with Automated Telephone Customer Service.” The study revealed that consumers rate automated telephone customer service higher than live agents for certain straightforward interactions. In five out of ten posed scenarios, consumers preferred automated telephone customer service systems over live agent interactions for tasks like prescription refills (66% rated automation highly, compared with 52% for live agent), checking the status of a flight from a cell phone (61% versus 49%), checking account balances (59% versus 36%), store information requests (55% versus 37%), and tracking shipments (53% versus 47%). The survey also revealed that automated telephone systems […]
Do you like it?1
0 Read more
Categories

Interesting article from SpeechTechnology “With Hard Work Comes Prosperity”. Published by Leonard Klie, posted Jan 10, 2010. Sweet for Self-Service The financial results seen by these companies are typical of the speech industry in general, which by and large weathered the financial storm much better than most other industries. And inside the speech industry, perhaps no segment fared better than the interactive voice response (IVR) market. “2009 was a great year for self-service—both voice as well as Web-based” says Donna Fluss, president of DMG Consulting. “Even with the recession, there was a lot of investment in self-service IVR.” Fluss expected the total IVR market to reach $2 billion by the end of the year. Analyst firm Frost & Sullivan was also bullish on IVR. At the start of the year, when the economy seemed at its worst, the firm surveyed call […]
Do you like it?1
0 Read more
Load more
This website uses cookies to improve your experience. We'll assume you're ok with this, but you can opt-out if you wish.Accept Read More
Privacy & Cookies Policy